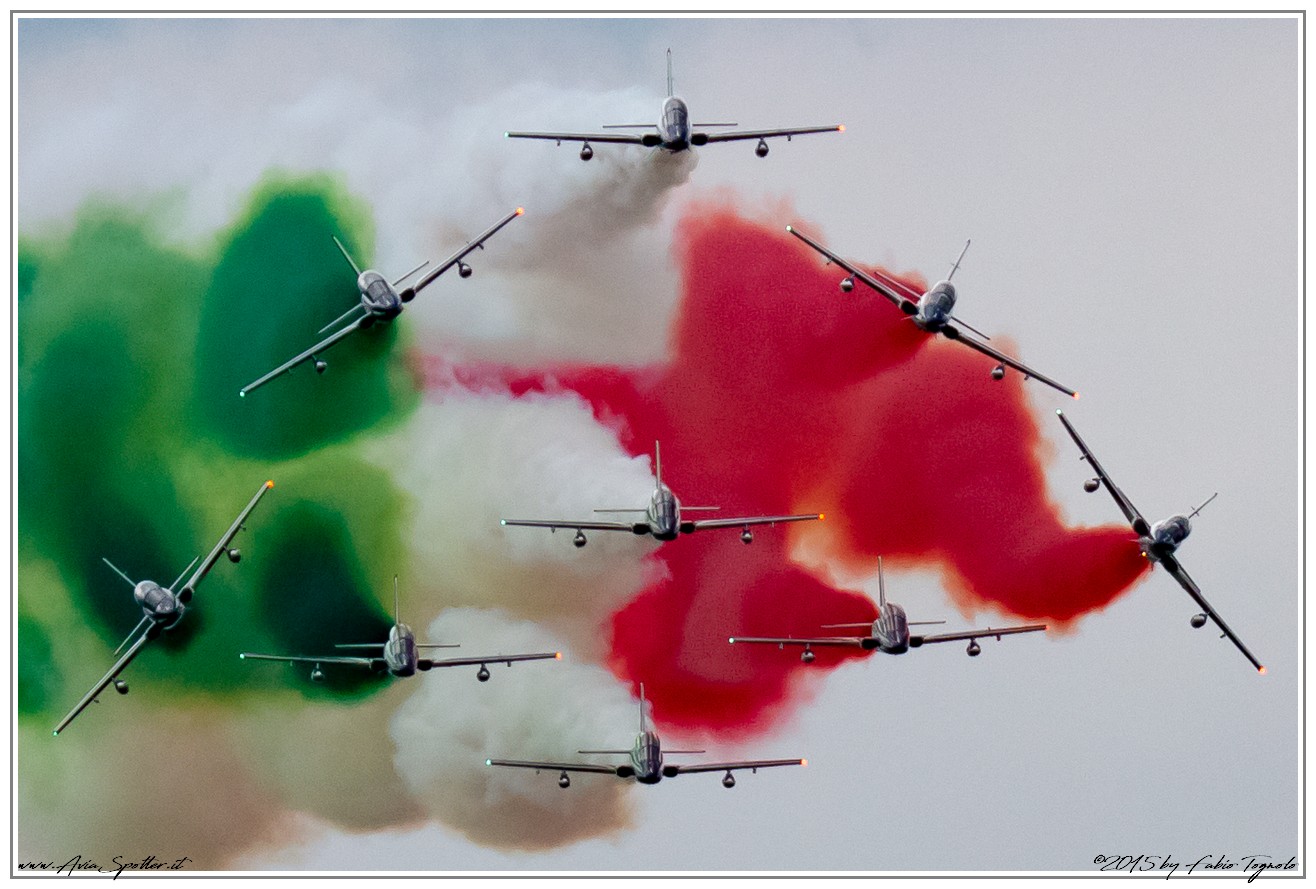 It was March 1st 1961 when they arrived at the Rivolto air base (Udine) the first six F-86E aircraft “Sabre” with the livery of the patrol of “prancing Horse”. The six “Sabre” they came from Grosseto, today one of the bases dedicated to the defense of the Italian skies and seat of the then 4th Aerobrigata, today 4th Wing. Waiting for them on the ground, their first Commander: Major Mario Squarcina. Thus the first cell of the”Special Acrobatic Unit”, original nucleus of the nascent Frecce Tricolori.
They have passed 60 years since that day and today, as then, the Frecce Tricolori have the pride of representing values, technology, the skills and ability to team up the entire Air Force. 60 years in which the National Aerobatic Team brought its performances in 48 countries of the world – from America to Russia, from Northern Europe to the Middle East and North Africa – spreading the Tricolor on the most beautiful places and on the occasion of the most significant events in the history of our country. A symbol of Italianness and a sense of belonging, but also of the values ​​and professionalism of all the Armed Forces, as well as the expression of the capabilities of the national industry and of the entire country system.
An anniversary that falls at a particularly difficult time, in which the importance of staying united and forming a team is renewed and strengthened. Precisely with this intent, at the end of May of 2020, the National Aerobatic Team made a historic overflight of all the Italian regional capitals, initiative that took its name from the strong symbolic value of “Tricolor embrace”, culminating with the overflight of the city of Rome on the day of 2 June – Republic Day.
“The Frecce Tricolori are well known, appreciated and bring our Tricolor all over the world”, says the Chief of Staff of the Air Force, Team Air Force General Alberto Rosso. “They synthesize everything that is technology, passion, capacity, competence and professionalism that Italy is able to export and bring to the world”.
A story, that of the Frecce Tricolori, made of passion and competence, that the men and women who have been part of it in these sixty years have contributed to making it famous. “The human factor within the National Aerobatic Team – says Lieutenant Colonel Gaetano Farina, Commander of the Frecce Tricolori – is critical. We are not talking about individuals but about teams, not only the pilots but also all those who work on the ground. Let's go find who is capable of working in a team, but also those who are able to get involved and accept criticism”.
The 313rd Acrobatic Training Group, this is the official name of the Frecce Tricolori, is a flight department of the Air Force made up of about one hundred military officers, Non-commissioned officers and graduates. The formation of 10 aircraft, 9 plus that of the soloist, is made up of pilots from the flight operational departments of the Air Force which, following selection, become part of the National Aerobatic Team; here they spend a parenthesis of their operational career and then return to the Departments at the end of the experience. The remaining staff belonging to the Frecce Tricolori, they are mainly maintenance specialists for the Aermacchi MB339A-PAN aircraft.

On the occasion of the anniversary of March 1st, RAI Friuli Venezia Giulia has made a documentary on the history of the Frecce Tricolori entitled “Sixty years in flight: the National Aerobatic Team” which will air at hours 22:10 on Mondays on RAI STORIA (channel 54 of digital terrestrial).

The history of the Frecce Tricolori – 1March 1961

At the end of the 1920s on the Campoformido airport (UD), located a few kilometers east of the Rivolto base, the first pioneers of aerobatic flight demonstrated how aerial aerobatics constituted the very essence of military fighter and its exercise was able to improve performance in aerial combat. From there, a tradition of collective aerial acrobatics came to life which culminated with the collective acrobatic formations of the 1950s identified in annual shifts in the Operations Departments of the Air Force: Black Lancers, Red devils, White Tigers, Thundering Jets and Prancing Horse.
Precisely from the latter, reserve patrol in 1960 and subsequent holder in 1961, the core of pilots was identified and formed a group that permanently dealt with collective aerial acrobatics and represented in all events at home and abroad, the Air Force and all of Italy.
March 1st 1961 they came to Rivolto, the first ones coming from the 4th Aerobrigata of Grosseto 6 F-86E aircraft “Sabre” with the livery of the patrol of “prancing Horse” which bore the emblem of the Ace Francesco Baracca (symbol given by the Countess Paolina, Baracca's mother directly to Enzo Ferrari for the Maranello car manufacturer).

Thus was born on the Rivolto airport, where it is still based today, the Special Aerobatics Unit which from 1 July 1961 it would have assumed the official name of 313 ° Acrobatic Training Group.
Arrived in the skies of Friuli Venezia Giulia, the six aircraft “Sabre” they headed for Campoformido airport where they looped in honor of the cradle of Italian collective aerial acrobatics. Subsequently they performed some aerobatic maneuvers on the Rivolto airport and then landed there. To the ground, waiting for them, Major Pilot Mario Squarcina, former Leader and Commander of the Patrol dei “Red devils”, that would go down in history, since that day, as the 1st Commander e “founding father” of the Frecce Tricolori.
The F-86E aircraft “Sabre” flew the first ever demonstration on May 1st 1961 in Trento Gardolo. In the first year of life, the Frecce Tricolori flew with the insignia of “prancing Horse” assuming in the 1962 a new livery and the emblem we know well.
From the season 1964 the Frecce Tricolori began to use the Italian FIAT G-91PAN aircraft which they left alone in 1982 when the transition to the currently equipped MB-339PAN aircraft took place.
Overflight and events with which it is realized, and Volo, the representative task assigned to the Frecce Tricoli are events with a great following that always accompany important moments in the history of our country.

AviaSpotter.it wishes to remember the 60th anniversary with 60 photographs taken from their own archives: LADIES AND GENTLEMEN…..THE TRICOLOR ARROWS!!!!!