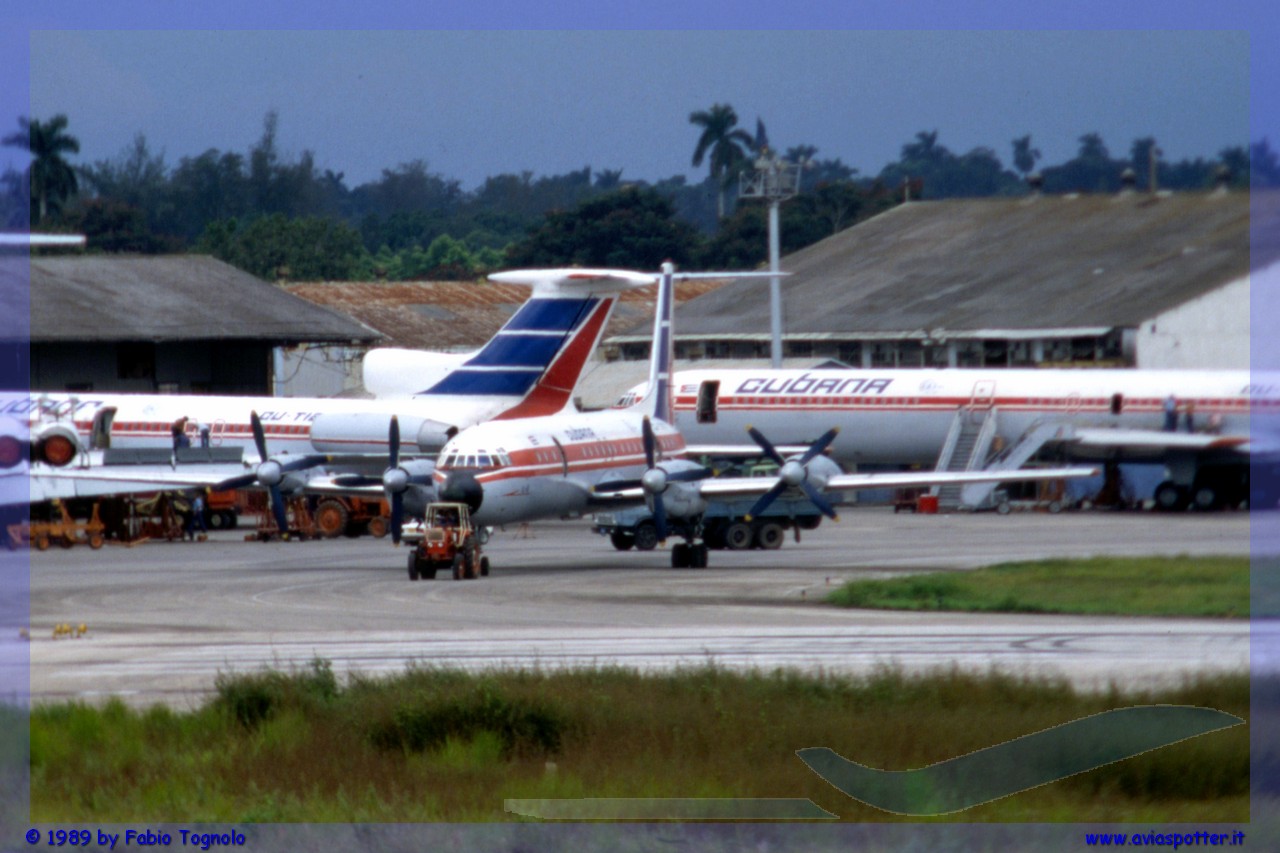 We go back many years: there was still the Berlin Wall. For this reason, Cuba, In addition to landscapes and a fantastic sea, was also interested in aircraft enthusiasts, Having great chance to see a little’ of aeronautical material behind the Iron Curtain.

Check Out 21 September: will of Milan Malpensa (was not yet divided into terminal 1 and 2) with a flaming Ilyushin Il 62M Cubana de Aviacion. In the square, the legendary photographer Boeing B 747 Jumbo della TWA.

Shortly after we leave: Milan – The Havana with scalo to Gander, Terranova. During the flight I have access to the cockpit of quadrireattore photographer and a little’ everywhere. The first surprises I find them during flights: Catalina, The 76 Aeroflot e, single copy in the world, il Conroy Skymonster della Heavylift Cargo. The airport is very short and photographer everything as best I can.

The first week of the trip is dedicated to the tour: also bring us to the museum of the Bay of Pigs where I find a Hawker Sea Fury FB11-541 of Fuerzas Armadas Revolucionarias, used in the 1961 Castro's troops to repel the invasion of Americans. The plane is in good condition and the door under the wings of simulacra of unguided rockets. The afternoon, during the visit of a nice town, I come from a flyover 8 military and I do not miss the opportunity.

The day after I take my first risk when photographer (from far away) a military airport with some helicopters Mil Mi 24, near Trinidad.

The fun starts during the week-long stay at sea. The first day we overflown by an I 8 with the written “FOR RENT” su un fianco. I can tell and I find the pssibilità to make tourist flights by helicopter or plane. The prices are more than popular: 25 $ helicopter and 15 in aereo. I certainly do not miss the chance. The first flight is on me 8, VIP version with furniture and no windows to better photograph the landscape.

The next day we average: l Antonov 2 one would expect for the flight by plane is equipped for the transport of paratroopers and offers only benches along the walls and a steel wire on the head to tie the parachute!!! Also here you fly without a door (replaced by some welded pipe) in order to better photograph the landscape.

Yet 2 days and fly on an Antonov 26 on our way to a small island in the Caribbean Sea. Access from the rear ramp, seats rather spartan and signs on the walls to indicate the vocation of velivolo.Il cargo flight is very short. Here I try for the second time the thrill of 007, when photographing, shortly after takeoff, a workstation equipped with anti-aircraft missile SA 2 Guideline.

The last time Air Force is the return flight. Already at the airport in Havana, I can photograph Yak 40, The rare 76 and, above all, a rare Ilyushin 18, all Cubana de Aviacion. The return flight is no history. just snap a few pictures during the stopover in Cologne, in Germania.

The pictures are not perfect. Let's talk about 25 years ago and my scanner does what he can. They are, however, good evidence of the event