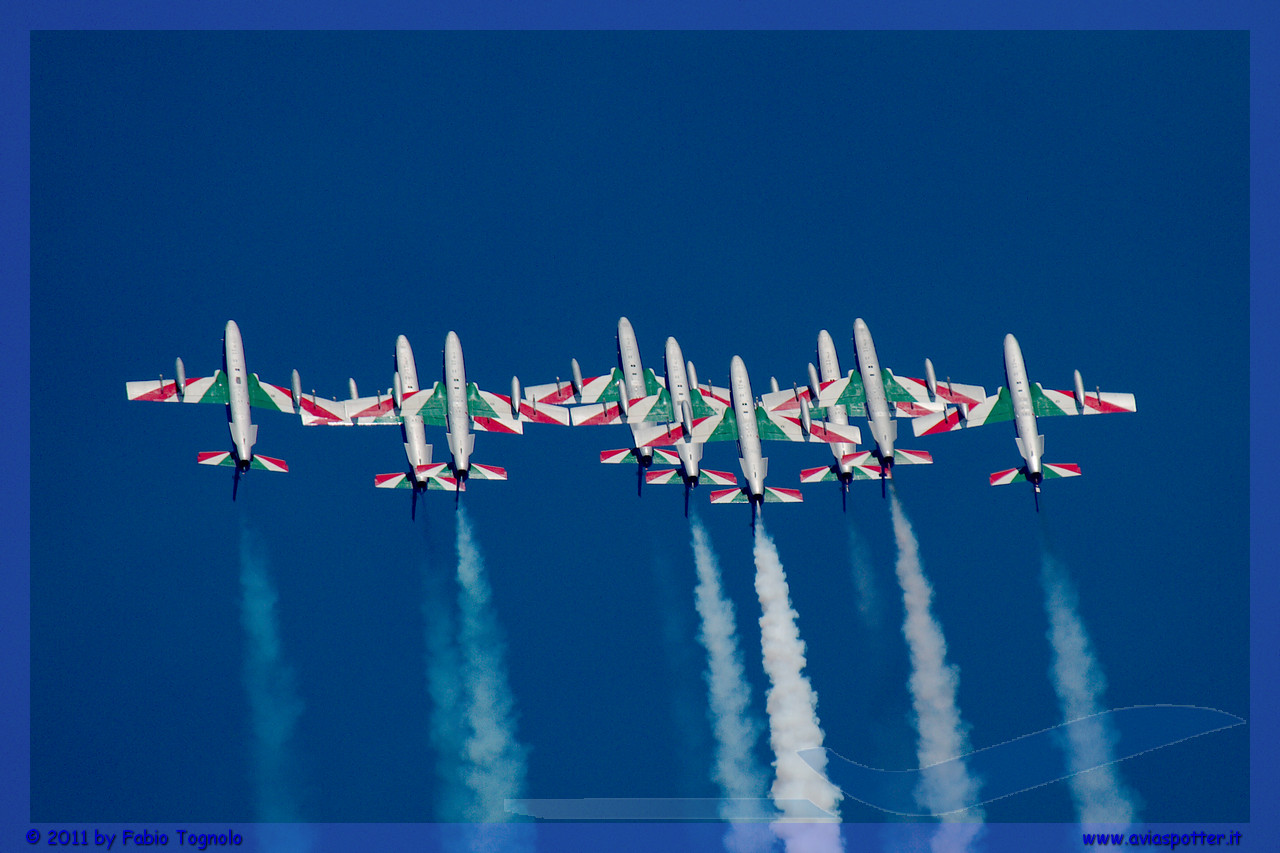 Sunday 6 September, as part of the activities organized to celebrate the Italian Air Force 55 Years of aerobatic team, will be featured in Looking Friuli, for the first time all together, the 8 Italian astronauts, Franco Malerba, first Italian to leave the Earth's atmosphere, Captain Samantha Cristoforetti. Do not miss this opportunity. The full story can find it which.

On the site of the Air Force dedicated to the event were published instructions to reach the Airport Looking Friuli on Saturday 5 is Sunday 6 September. There will be different routes depending on the mode of transport. Follow the instructions and everything will be easier. You can find it all which.

Published a useful guide for newcomers to the Air Show. The tips will surely unnecessary for Spotter avid but could be useful for those approaching for the first time to an Air-Show. The guide you can find it which.

The anticipation of the other yesterday confirmed!!!

Today was published the official list of participants in the event and, between Acrobatic Patrols, are the Royal Saudi Hawks. We can then attend one of the rare performances in Europe of Hawk Green and White Air Arabia.

They also appeared, the various lists of participants, other interesting appearances, including all the assets of MP, and 2 “Heavy Metal” foreigners: F 18 Spanish and F 16 USAF.

The official addresses are as follows:
– Show Static and thematic areas

The news published yesterday for the official announcement of the Air Show in September deserves more attention.

Between the lines appear the news that will be in attendance 9 foreign aerobatic teams. In addition to the countries that already appear on the list of participants is cited, first, l’Arabia Saudita. That the Air Force will be preparing a delicious surprise?

I hope, in the next days, It can give you more information.

It’ It was inaugurated this morning, the presence of the President of the Friuli Venezia Giulia Debora Serracchiani and General of the Air Force Maurizio Lodovisi, Commander of the Air Force, the new museum area dedicated to Frecce Tricolori, located inside the airport “Mario Visintini” Rivolto del Friuli.

The occasion was officially presented the air show that the Air Force will organize the next 5 and 6 September, to celebrate the 55th Anniversary of the National Aerobatic Team.

The full story can find it which.

RTL 102.5 Radio is the official partner of the 55th Anniversary of Frecce Tricolori. For the occasion, a competition: in palio “an unforgettable experience with the Frecce Tricolori”. To participate simply log on to website and respond to 3 simple questions. Join the crowd!!!!

For those who want to bring Looking train, on the site of Trenitalia is the offer for Saturdays 5 is Sunday 6 September. 90 trains for a total of 50.000 Places are available. The complete news this link.

A little update on the program. They have joined the legendary Wingwalker of Breitling. We can then also taste us the beautiful Stearman orange with fearless acrobats twirling on their wings.

Today we sent your email for issuing passes “media”. Aviaspotter is credited.

They came today, as announced, emails from PAN to warn those who had applied, that the “pass Spotter” was released. The news which promised to be the possibility of having it was reported in the press No. 1.

All aircraft of the PAN, on the occasion of the 55th anniversary, They received a new color. This includes a new drift where, literally, “explodes” the tricolor painted on the sides of the aircraft. Under the same result shows the logo of 50 age, while under the cockpit they are painted silhouettes of aircraft supplied to the PAN in these 55 age (F 86, G 91 e MB 339). The profile you can find it which.

There is a new acrobatic figure in the program of the Frecce Tricolori. To celebrate 55 years it has introduced a new budget that was presented today in the Exhibition Aerea Lignano Sabbiedoro. The video you can find it which, per minute 12. The name has not yet been chosen and why was launched a competition in which everyone can participate. All the explanations in the Air Force this page link. It was the 2006 that the program of the PAN was not inserted a new figure.

The Air Force has published the official website for the Air Show 55 years of PAN. All the latest news about the flight program and participants in the event can be found here: http://www.55pan.aeronautica.difesa.it/

It’ It was published on the PM link to access credits “Spotter” and “Print”. For first time, anniversaries in the history of the PAN, It will be able to access the base Looking for attend rehearsals.

The exact link to be accessed is as follows: http://www.paoaeronautica.it/area-spotter.html

Prepare a scan or photograph of your identity document, since you have to attach it in the form. The procedure will remain open until 19 July, but I recommend you hurry, also because I do not believe that the available places will be plenty.

See you soon with a nuoco statement that will allow you to follow all that there is to know the Event of Aeronautics 2015 in Italy.

Today begins the march towards Air Show for the 55th Anniversary of the Frecce Tricolori that will take place the next 5 and 6 September Looking del Friuli.

The important news, leaked right now, It is that it is even predicted, for the first time in Italy in an official Air Show, uno Spotter Day!

L’evento, in all probability, will be held on Friday before (the 4 then in September) and access will be strictly controlled. You will need to register through an online procedure available from June 1, the site of the Air Force.

The reports speak of a number “quota free” of accesses and that it will be possible (because it presupposes a particular education and sensitivity of these) photographing planes present no obstacles and the tests of flight.

The news is really sensational. I will keep you updated as more news I will arrive.