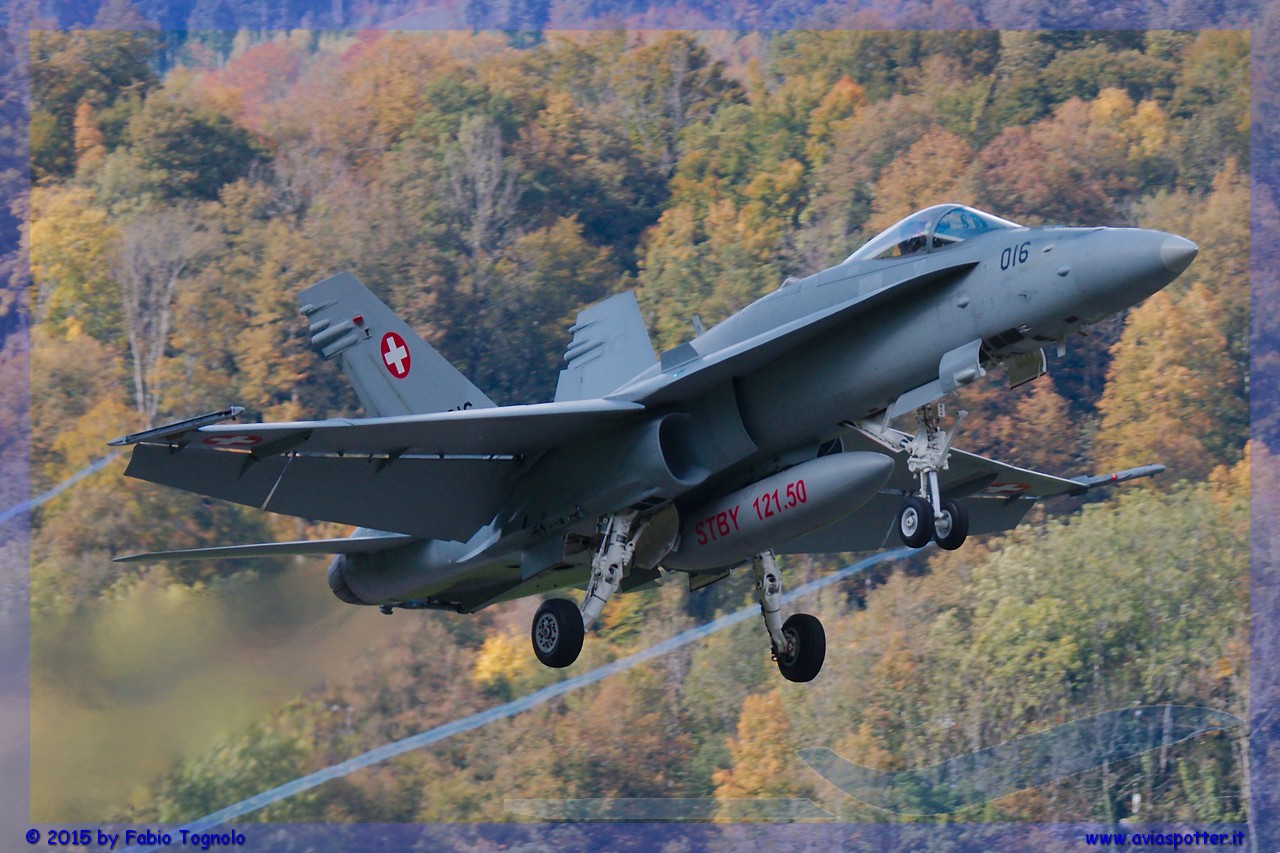 Today is the big day.

We start early in the morning from Milan, with friends Daniel and Roberto, to reach Meiringen, from there, be transported on a Super Puma of the Swiss Air Force, at the range in share Axalp, where today there will be the usual annual exercises of F 18 and F 5 Swiss.

Unfortunately yesterday was canceled, and even forecasts today leave no hope for anything good, but we start trusting.

The asphalt unrolls quickly under the Focus and 7.45 we are near Meiringen. The proverbial Swiss efficiency immediately puts on show: zealous military ask us passes and direct us to the parking lot. We are the 4th car to arrive. The shuttle picks us immediately and within minutes there at the entrance gate of the Base.

As expected the weather is cold and wet, with low clouds and fog. The scenery is fabulous with the slopes of nearby mountains colored by the many trees now in autumn colors. All shades of red, brown, yellow and green underlie the place. The puffs of fog that creep here and create almost poetic glimpses. But we are here for Hornet !!! sure…..It does not bode well.

The place is already well known for the many acquaintances and we go immediately on the terrace to catch any movements. They spend a few minutes and you will see on the horizon the first: un PC 6 Turbo Porter is getting ready for landing, immediately followed by a second. The light is hard to penetrate the clouds and the sun is still behind the mountains but the photos we take the same.

Immediately after arriving several Super Puma, making us hope for the climb. One of these, today, will our bus!!!

At one point we hear, behind us, the characteristic noise of the F404 that are set in motion: arrive Hornet. We see them first slide on the road leading to the track by the shelter in the cave behind the base, and then do the catwalk in front of us, on the ring, to move in the header 10. The pilots greet fans already out in force on the terrace and along the low fence.

Arrived in tested and authorized for takeoff, pilots push the throttle up to full AB and begin their run. The moisture present to form around the wings and the fuselage above the clouds of condensation as the planes begin the ascent, retreating quickly Cart. Surely they are going to the shooting range and soon we will know if the weather conditions are sufficient to ensure the safety of shots. In otherwise…..we will have missed the bus.

We look forward with confidence to return and, after an hour we see them show up in the valley, to land from the head 28. The outlet hole of Vulcan, on the nose, it's clean: the gun did not fire. Bad sign.

We go to the press conference to present the event. The large conference room is full. The Commander in Chief of Schweizer Luftwaffe, Aldo C. Schellenberg, He took the floor and began to speak in German, official language of this part of Swiss territory. The tone and facial expressions make us understand, beyond the unknown language, that the news is not good. The French translation is already clearer and we understand that the event, Also today, was deleted. The translation in Italian but surprises us. The event was so deleted , but, for consolation, the Air Force gives us still a Super Puma flying over the valley of Meiringen and Lake Brienz. VERY LARGE!!!!

After the interesting conference where, with the help of some slides in German and French there are illustrated tasks, current and future state of the Air Force of the Confederation, we go to the square where, divided in groups of 16, We expect to be boarded. Finally comes our turn. Will we have the T-314, un AS 332M1 Super Puma. Boarding is fast: we sit on the seats in cloth and allacciamo seatbelts 4 points. Just behind the drivers and I can see their “office”. The windows are large and allow a great view. The environment is very “scented” by fuel vapors and the impression is of great solidity and efficiency. Closed large hatchback car taxis for a few meters and rises. I turned on the GPS and, at the end, we review all flight details.

Flying low and slow on the autumn landscape described at the beginning makes it even better. The lake water is of a strange blue pastel: It looks colorful. I 12 minutes of the flight go by in a blink of an eye and we are soon with the wheels on the ground. we loose against his seat belt and, when the specialist opens the tailgate, let what, to bus, It has become a golden carriage. On land there are waiting for a sandwich and a hot tea, kindly offered: never drank a cup of tea so good.

Let's get back on the terrace and we photographed the comings and goings of helicopters, while waiting for the afternoon flights of Hornet.

To change the point of recovery we carry on shelter in the header 28 and we look forward to. Cows grazing in the meadows surrounding the airport continue to graze at all bothered by the constant movement of helicopters. A kite flies elegantly and clearly stands head that moves in search of a certain moment prede.Ad, the deep sound, already heard in the morning, It fills us with joy. It comes out of the chariot and is movable toward us:this is a clear indication that the planes will take off from this magazine. And here they are, down the road: pop up one at a time and are arranged in single file. From the top of the shelter the outlook is fantastic: the first clear and others dancing in the hot gases of the engines running. Enter one at a time on the track and settle in pairs, Before turning on the burner post and pounce on the track.

At the end of the take-off back towards the terrace to experience a new perspective that we noticed in landing the Super Puma. This place, until a few months ago, did not exist, and it was created with the new fence. It’ virtually at the point of takeoff of both tracks and allows good locations for landings from both directions. Skip the usual hour or so and there they return. They are in training wing, ups and, after overflying, open and lead to landing. With great delight of those present carried, all 4, a touch and go and repeat the circuit to move definitively landing.

The day ended. Also this year jumped Axalp: I seem to remember is the 4th consecutive year.

It will be for next year. Meanwhile these beccatevi.