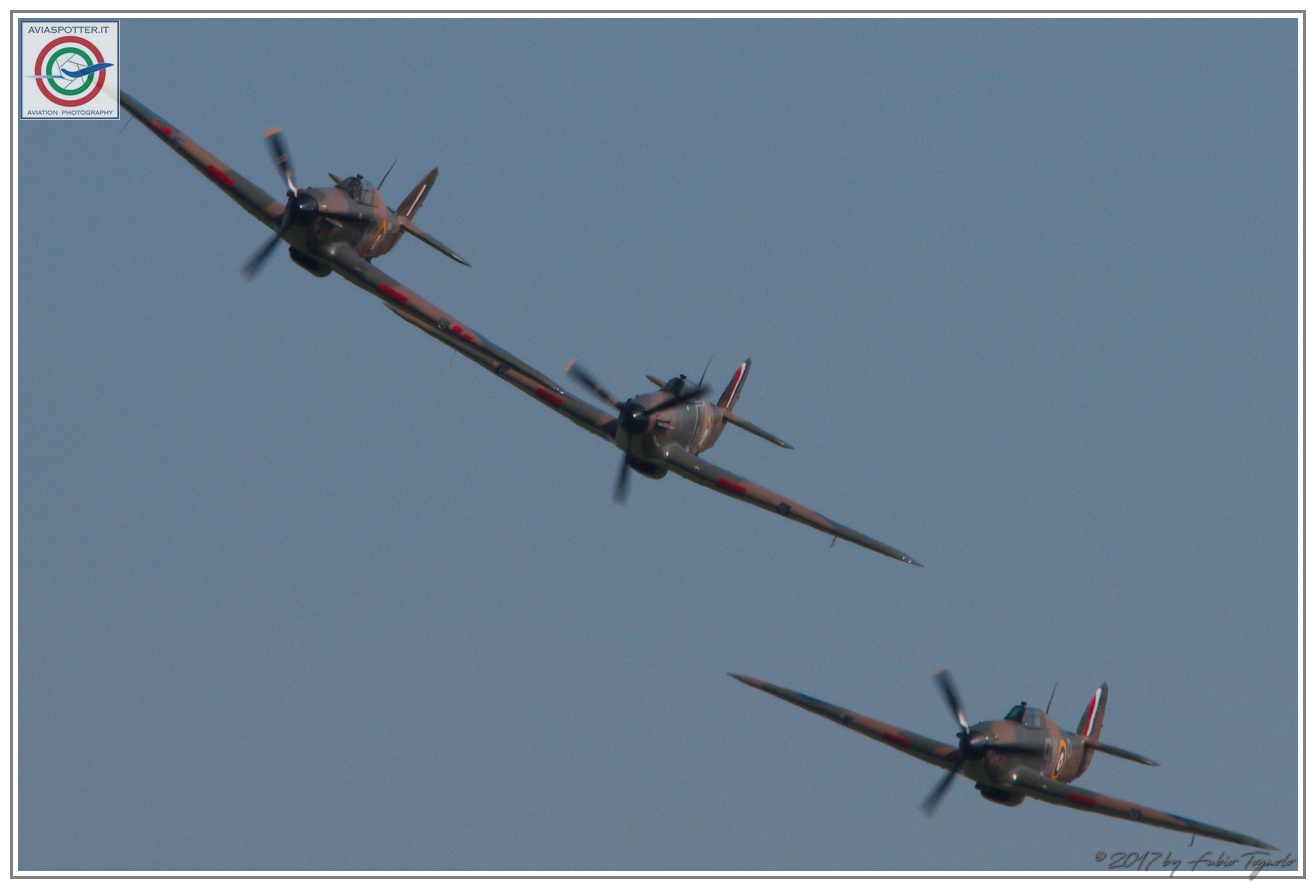 The background:
It was about the middle of July when I came up with a crazy idea. Why not go back to Duxford day, like in 2014 (see the service which)?
It, since we, why not do it for a special occasion, type one of the great air show taking place regularly on the airport site for the museum? Time to see the next event is the Battle of Britain Air Show, in the program 24 September, and launch the challenge of Whatsapp. They respond in a few minutes the usual 4 crazies and the machine is full. We book the usual flights from Bergamo to Stansted and the adventure can begin.

The adventure begins with he wakes up at 03:15 but the morning is light heel elevator: si va a Duxford!
Shower, dressing, throw on a backpack with trust Canon and all the equipment. For the occasion I bought at the flea market (but the object is practically new) a new photo backpack, un Lowepro Slingshot 202 AW, Tamrac Expedition 7x smaller than that there is not in the cabin, paying a really stupid. The ride to LIME has no history. Car park,

I present an overview of the planes parked, quickly overcome through security and I stop by McDonald's for breakfast.

I reach then the other members of the expedition. Even the Ryanair flight is no history and so we reach EGSS 20′ in advance, after flying over the airport and Woodbridge Wattisham.

The landing is a little’ brusque but I enjoy a Jumbo in all white livery waiting to take off after we released. Among the millemila '737-800 there is also the new Ryanair arrived in the livery Boeing and I do not do the run.

The processing of input practices in England and rental are very fast and, after some heartache of mind when driving on the wrong side of the road, we reach Duxford. The organization, always eats, it's perfect. We reach the car park in a flash, overcome security checks for entry and we are inside. The first stop is to make a new breakfast: beer and sandwich with sausage and onions to 08:58 we are all.

I can not believe it: the flightline is very long. I recognize Spitfire and Hurricane but are so many that I can not count them. There is no place on earth where they can see so many in one go. Before me is the Bristol Blenheim Mk. I recently reported on the fly and used for the filming of Dunkirk. The emotion is very strong. The “static” it's a lot “English”: no barrier between the audience and the planes (non serve, Everyone knows that you can not approach: why put them?), Airline distant enough from the public and each other to allow ease of doing photo. Here they know exactly what the paying public wants: It is not only an Air Show, Culture is a time of Aeronautics and homage to the pilots of World War II who defended the skies of England Nazi invader.
I do the static 3 times before being able to go out to look for a place to resume flying during Air Show. There's already people everywhere and the search is complicated. We find in the end a little place on the hill leading to the museum of armored vehicles. Before you get there, however, we make a pilgrimage to the pavilion dell'USAFE (United States Air Force in Europe) to walk under the B 52 and caress the nose of the legendary SR 71 Blackbird.

The flights begin with take-offs 6 Hurricane who take a little’ of passes, both in training which individually. After landing in the sky appears the majestic Lancaster of the Battle of Britain Memorial Flight , accompanied by Spitfire and Hurricane of the same association.
The show is tightened, gapless: the planes are getting ready to take off and go flying aircraft while the other celebrating their union expulsions after overflights.

Unfortunately, the position of the sun is quite Front (the perfect British organization has failed to move) and photographs will suffer a bit’ but the air show is superlative.
It continues with the Tiger Nine, patrol of 9 DH.82 Tiger Moth variously colored flowers that after a few steps in formation perform in stunning intersections sequences. While the sky is occupied by the De Havilland biplane is flying the P 40C of All Metal “The Fighter Collection” who performs after landing of 9.

They are already preparing to take off the HA 1112 Buchon e i 2 Yak 3 who will face off in a dogfight with a lot of explosions and smoke from the aircraft to the ground. The Messerschmitt Me Online 109 and a little’ It ruined by Merlin in the nose but the new Spanish aircraft coloring helps to make it really look like the legendary German plane of the 2nd World War: It will also be for the swastika painted on the tail?
It continues with the planes of the First World War “The Great War Display Team”: Fokker Triplane, Euro 504K, Sopwith Triplane Sopwith Camel and are not often seen in flight, above all (they too) seasoned with explosions and smoke abatement simulants.

Immediately after flying one of the stars of the day: the beautiful Bristol Blenheim Mk. The recently restored. I do not “pull” in aerobatic maneuvers (moreover, he was not born for that) but it certainly saves.

I'm not going to make the record of the whole day: too long. In the sky we have seen it all: B 17, MiG 15, Catalina, Corsair, Vampire, Sea Fury, Bearcat, Wildcat e Dakota. The day ended with the flight of the Spitfire patrols (13 in flight simultaneously!!!), Launched in scramble from the lawn together in formations 3. A show thrilling.

The final salute was given by an epic training: 10 Airline symbolizing the day: Blenheim escorted by 3 Spit, followed by 5 Hurricane e 1 Gloster Gladiator. How better to symbolize the Battle of Britain?

The return from the trip had no history: slight delay takeoff recovered almost entirely in flight over Europe, following a very classical route.

The Arrival in Orio al Serio at 23:20 and the subsequent drive alone to return home was just the opportunity to retrace a fantastic day, unforgettable, that any fan of aviation should go once in their life. Next year will be repeated on 22 and 23 September: do it again?

2017 – A Lakenheath a spottare i Raptor by Irene Pantaleoni