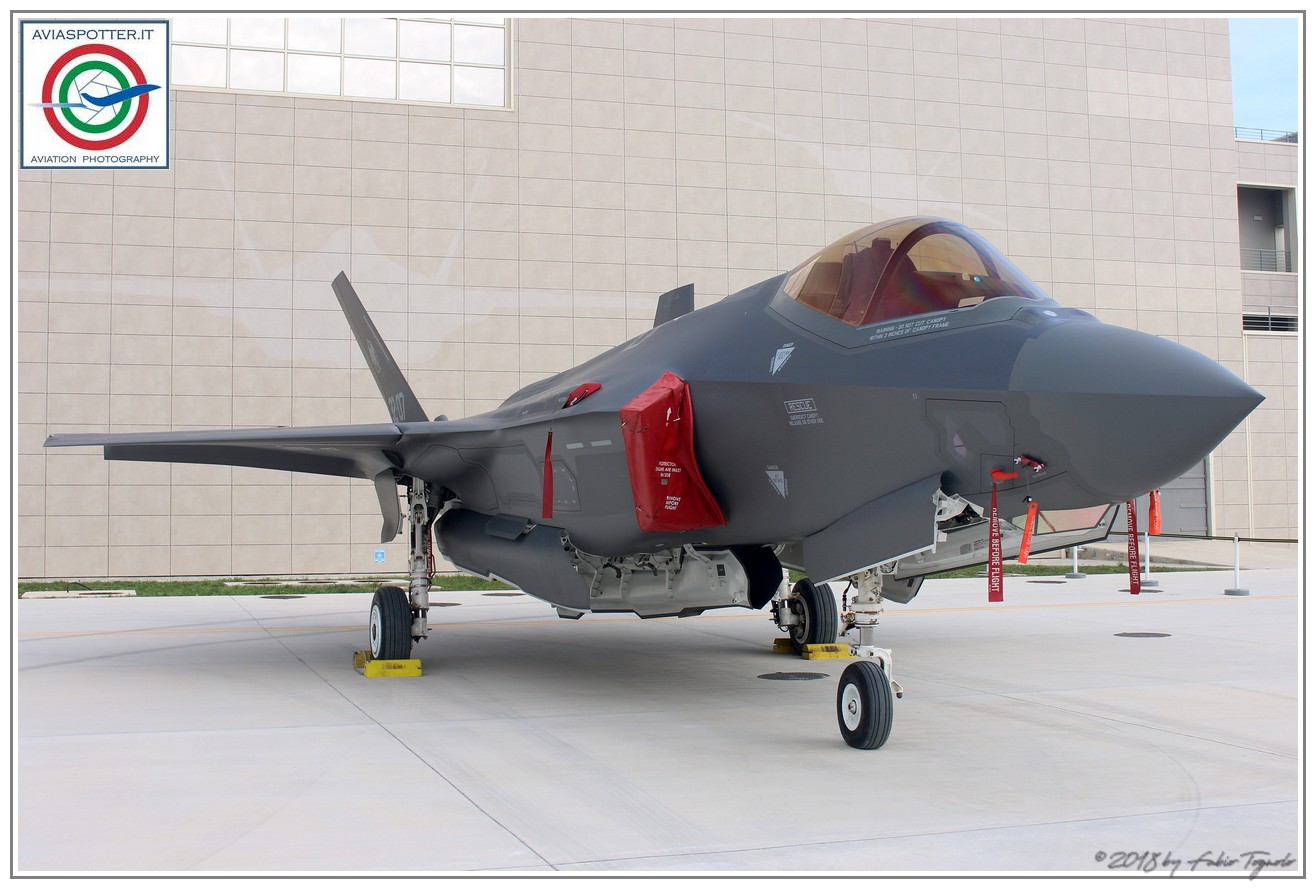 Third day (photos of the first and second day can be found which and which) alla TLP 2018-04, Amendola, to follow the event at Media Day.
The day, perfectly organized, It has allowed the audience to experience first hand the state of the F program 35 in Italy.

The first part of the morning (the presence of the Chief of Air Staff, Team Air Force General Alberto Rosso) He was dedicated to the Commander of the conference of the 32nd Wing, Colonel David Marzinotto, on Assett that equip: MQ 1 Predator A+, MQ 9 Reaper e F 35A Lightning II. This budget is the airport of Amendola center of excellence the Air Force with one of the highest technological levels in the world.

Amendola (ICAO: GOOSE) It is huge, his 14,5 km perimeter and 1100 hectares make it the largest military airfield in Italy and second in Europe only to Ramstein. It is about 15 km east of Foggia, along Highway “Garganica” and it is named after Lt. Pilot Luigi Rovelli, gold medal for valor.

the April (Aircraft Pilot in Remote) They are supplied at 28 ° and 61 ° Group, as already mentioned, They are the MQ 1 Predator A + e i MQ 9A Reaper. These aircraft at General Atomics only at first glance may seem big aircraft. They are instead packed with the best that modern technology has been able to innovate in terms of vision systems and image transmission and succeed in orbit on the objectives assigned to 30 hours (!) without interruption, transmitting at any point of the world information captured. They operated in all countries where our Armed Forces have done and perform actions. Right now there are 2 detachments: one to Sigonella (61° Gruppo) and the other in Kuwait, ad Ali Al Salem. Also they carry out missions in case of risk events (G 8 2009, Jubilee 2015), natural disasters or aid (Safe operations in the Mediterranean Sea and Mare Nostrum). The first and oldest model weighs up to take-off at just over a ton while the second, much bigger and handsome, it weighs over 4 1/2. To take full advantage of their performance is not enough only the pilot, but it is necessary a crew of 4 people: ball, Sensor Operator, Mission Monitor Coordinator e Avionics Specialist, a highly specialized team that works together to squeeze by the sensors of the aircraft until the last bit helpful.

After the part devoted to drones, it was the turn of the 13th Group with its Lockheed Martin F 35A Lightning II, the new 5th generation aircraft supplied the Air Force. I tell you now that the presentation was very interesting and exciting for the obvious qualitative leap made by the new JSF (Joint Strike Fighter) that left a trail of dust all over what was there before.
It is not just about performance, but the whole way of thinking fighter planes. Who will these aircraft will be one thousand miles ahead compared to everyone else and Italy will not be among them !
The aircraft, He landed at Amendola for the first time the 12 December 2016, It is currently present in 10 duplicate in the Air Force files. It’ selected from the AM and by the Navy to replace Tornado, AMX and AV 8B approaching the end of their useful life. The initial requirement provided, compared with these machines:
– The increase in the combat radius with armament in the internal bays
– Very low radar signature and ability to operate in high threat level environments
– Avionics advanced and fully integrated, with data link and targeting capabilities high distance and accuracy
– Capacity netcentric.
All this guarantees the F 35 to be a real machine from Air Superiority, able to collect and distribute information in a timely network to decision makers. A real multiplier then forces, It equipped with more than 150 processors that process something like over 8,6 million lines of software programming (compared to 1 million rows of 4th generation aircraft like the Typhooon or 2,2 million F 22) !!! Let's not forget the supplied sensors: the highly advanced electronic scanning radar AN / APG 81, FLIR, IRST e CNI (Communications, Navigation and Identification), all it integrated in the projected display inside the helmet visor of the pilot (HMS), allowing them to have a “situational awareness” a 360°, an unprecedented ability !
The new Lightning will then “Game Changer” Air Force, providing it with a platform capable of penetrating, to survive, collect and distribute essential information / strategic and providing an important tool for international relations to safeguard national interests.

After engaging presentation, Marzinotto the Colonel left the stage to Colonel Andres Maldonado, Comandandante del Tactical Leadership Program, who illustrated the TLP program in general and the particular event Amendola. The exercise will continue until 14 December and almost every day there is a different mission aircraft of all participating nations (Italy, USA, Germany, Belgium and the Netherlands) divise in Red Force e Blue Force.

At the conclusion intervened CSMA, general S.A.. Alberto Rosso to break the news of the coming of the 13th IOC Group (reported which), first department in Europe to achieve this goal.

Afterwards we were taken inside the citadel F 35, where a static had been prepared with a copy of all air present exercise and the opportunity to ask questions to the participants in the pilots.

It’ It was a great day, which allowed those present to feel first hand the profound meaning of “Air Force 4.0”, a concept that already the previous CSMA, General Vecciarelli, He had introduced and today we have seen explained in the most direct and credible way: with facts.