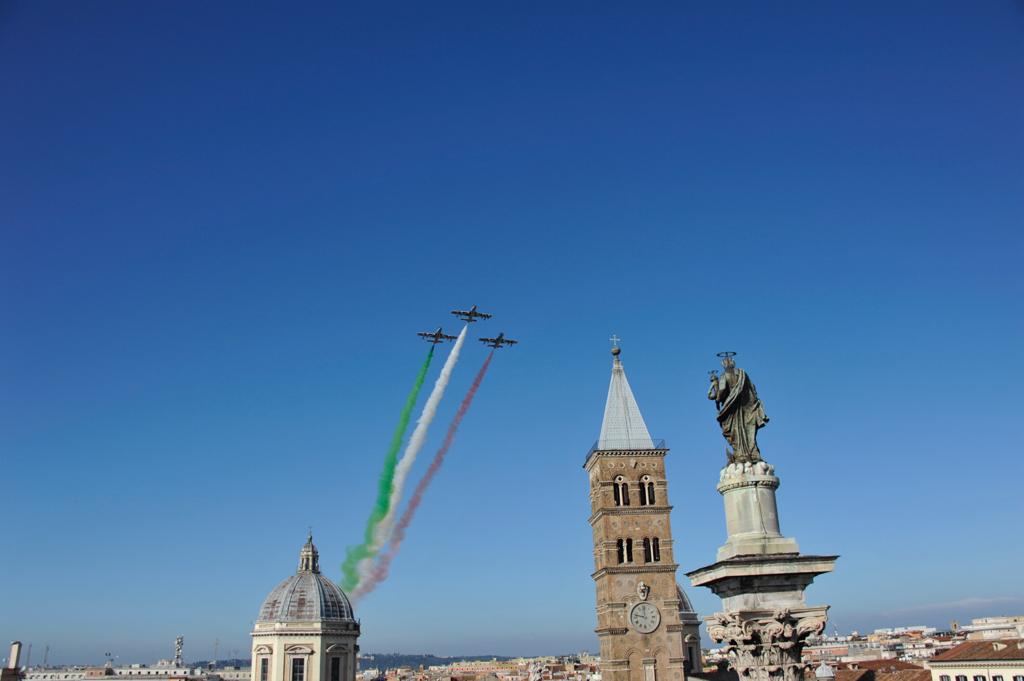 The Air Force has celebrated this morning the Blessed Virgin of Loreto, the “Patroness of aeronauts“.
In Rome, the Mass dedicated to the event was held in the Basilica of Santa Maria Maggiore.La church service, officiated by the Military Ordinary for Italy, S.E. Archbishop Santo Marciano, assisted by the Episcopal Vicar Don Antonio Coppola, He saw the participation of the Chief of Staff of the Air Force, the air force General Alberto Rosso, and numerous representatives of the military and civilian personnel of all agencies of the Air Force.

“We are now in the Year of the Holy "said Archbishop Santo Marciano during the celebration" Today we are writing an important page of history of the Air Force and will be especially you doing with your life given for love, "he concluded, addressing directly to the young people present "service means above all to the gift of self for others".

During his speech at the end of the celebration, he Gen. Red spent positive words, wishing all those present that "this Jubilee Year will be a happy occasion to demonstrate the passion, generosity, values ​​and commitment to service that we are called upon to play, each with its own task, small or large ".

After the ceremony, Red General has received the sacred effigy of Our Lady of Loreto, represented by a statue contained in a specially made oak theca, that over 2020 He will visit all the institutions of the Air Force throughout the country. The traveling exhibition effigy which will begin in the first decade of January 2020, allow this Holy Year to be experienced in a capillary.

At the end of the Eucharistic celebration, reduced formation of the National Acrobatic Patrol flew over the Basilica of Santa Maria Maggiore.

On the occasion of the celebrations that will be created for the centenary of the Blessed Virgin of Loreto which “Patroness of aeronauts”, They were promoted numerous cultural initiatives, religious and charitable. These events also represent a valuable opportunity to reflect on the seriousness that such a complex activity as the flight takes: passion, attention and professionalism are all essential elements to ensure the security of our country is always guaranteed.

According to tradition, The house occupied by the Virgin Mary's family was composed of a cave carved into the rock and still kept in the Basilica of the Annunciation in Nazareth, and a brick front room.

Legend has it that the “santa Casa” in which Mary was born in Nazareth, preserved in the Basilica of Our Lady of Loreto, It was transported “by angels”. This small sanctuary Bible, He fell into the hands of Muslims, It was moved prior to Tarsatto in Dalmatia (1291), then in the wilderness of Recanati and finally to Loreto on the night between9 and the 10 December 1294.

Such an event is recalled with the “the Coming Festival“, a series of celebrations that are held every 10 December the Marches and beyond.

In the 1920 the aviation phenomenon, remained for a limited time and restricted to a relatively small number of fans, conquered looking daring of human flight, He had experienced considerable increase, especially during the tragic period of World War I. They they activated concrete steps to ensure that this new form of mobility had its heavenly patron. The devout tradition of Loreto seemed particularly suited, He is choosing and directing it to Our Lady of Loreto.

The conviction of this miraculous translation “steering wheel” He urged Pope Benedict XV, accepting the wishes of the pilots of the 1st World War, to appoint by decree of 24 March 1920, the Blessed Virgin of Loreto “Patroness of aeronauts”. The protection of Mary, therefore, is not limited to air transport operated by the Armed Forces, but it refers to any person who travels and how many, in the same aircraft or ground services, They are responsible for the safety and peace of mind of those who are transported.

In the 2020 will celebrate thecentenary of the proclamation of Our Lady of Loretowhich patron of aviators.

By virtue of the special bond that joins the Armed Forces to Our Lady of Loreto was signed, at the Pontifical Museum of Loreto, a cooperation agreement between the Air Force and the Pontifical Delegation for the Shrine of the Holy House, aimed at promoting cultural events and activities, religious and solidarity which will take place during the 2020.

You can discover the various initiatives related to Loreto Jubilee clicking on the followinglink.

Below are some photos of the event in Rome