Saturday 7 December 2019, at the Luni Sarzana Station Helicopters (SP), It was held an Open Day on the occasion of the fiftieth anniversary of the foundation of the 5th Helicopter Group. 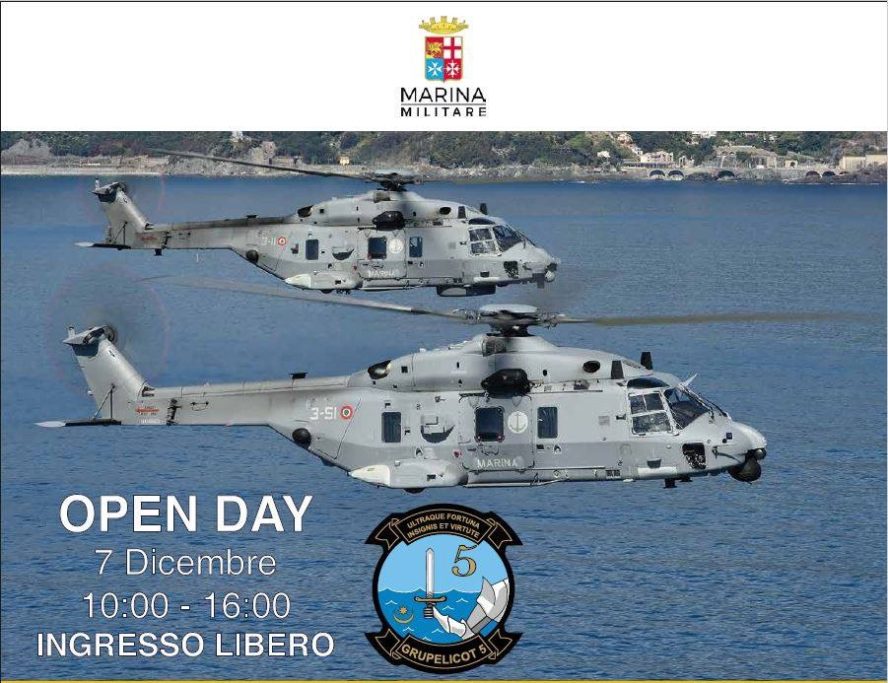 The 5th Helicopter Group operates exclusively on the SH-90, the two available versions that are designed to tackle the tasks of

In addition, the SH-90 have complementary roles such as :

For the Open Day were present inside the square, an NH-90 in configuration and machine-gun armed Special Operations Transport rotating barrel M-134, An EH-101 configuration also in Special Operations and Transport with a machine gun MG-59 to the starboard hatch, a Nemo AW139 Coast Guard and AW-169 with brands I-EASJ, flown in directly from Leonardo plants. The latter took off for some tests around 13 and it is returned to its base after about an hour of flight maneuvers and.

Inside the large hangar maintenance, two helicopters, a torpedo Mk.46 NH-90 in CONFIGURATION armed ASW and an EH-101 in maintenance. In the hangar they were displayed models of the helicopters previously used by the Navy, equipment of firefighters, and pilots of Air rescuer, with models dressed in flight suits and helmets.

Inside the base were also visited the Center Mission Simulation for EH-101,  Flight simulators where pilots are trained to landings and takeoffs on the decks of ships in any weather situation and with any kind of emergency, theExperimental Aeromarittimo Center (C.S.A.) and the Training Center where ditching Forced The new Helo Dunker which was inaugurated on 30 October 2018,  It has the task of preparing the flight crews of the Navy and Air Force to the emergency escape from a helicopter in case of ditching.

l'helo Dunker, a structure built as the cabin of a helicopter that is immersed in a pool and can be rotated up to 180 degrees. Inside of, crews are trained to get out of doors and windows in full visibility or dark glasses to simulate the complete darkness in case of night ditching or scarce visibility.

The modular system called M.E.T.S. (Modular Egress Training System), It can replicate the cabins of the EH-101 helicopter, SH-90 and HH-139. Training for survival at sea and escaping from 'helicopter have become much more realistic than in the past because now there is the possibility of creating any type of malfunction or blockage of the helicopter doors. The training managers have explained that these operations have an average output extremely fast time stood at 15/20 seconds and crews can use the mini oxygen bottle contained in survival staffing worn over the flight suit.

The old Helo Dunker who had the shape and configuration of an AB-212 was positioned right outside the property.

The day drew many fans and families with children that have been received with great enthusiasm and availability from all over the Navy personnel, to which we give our thanks for the excellent program.