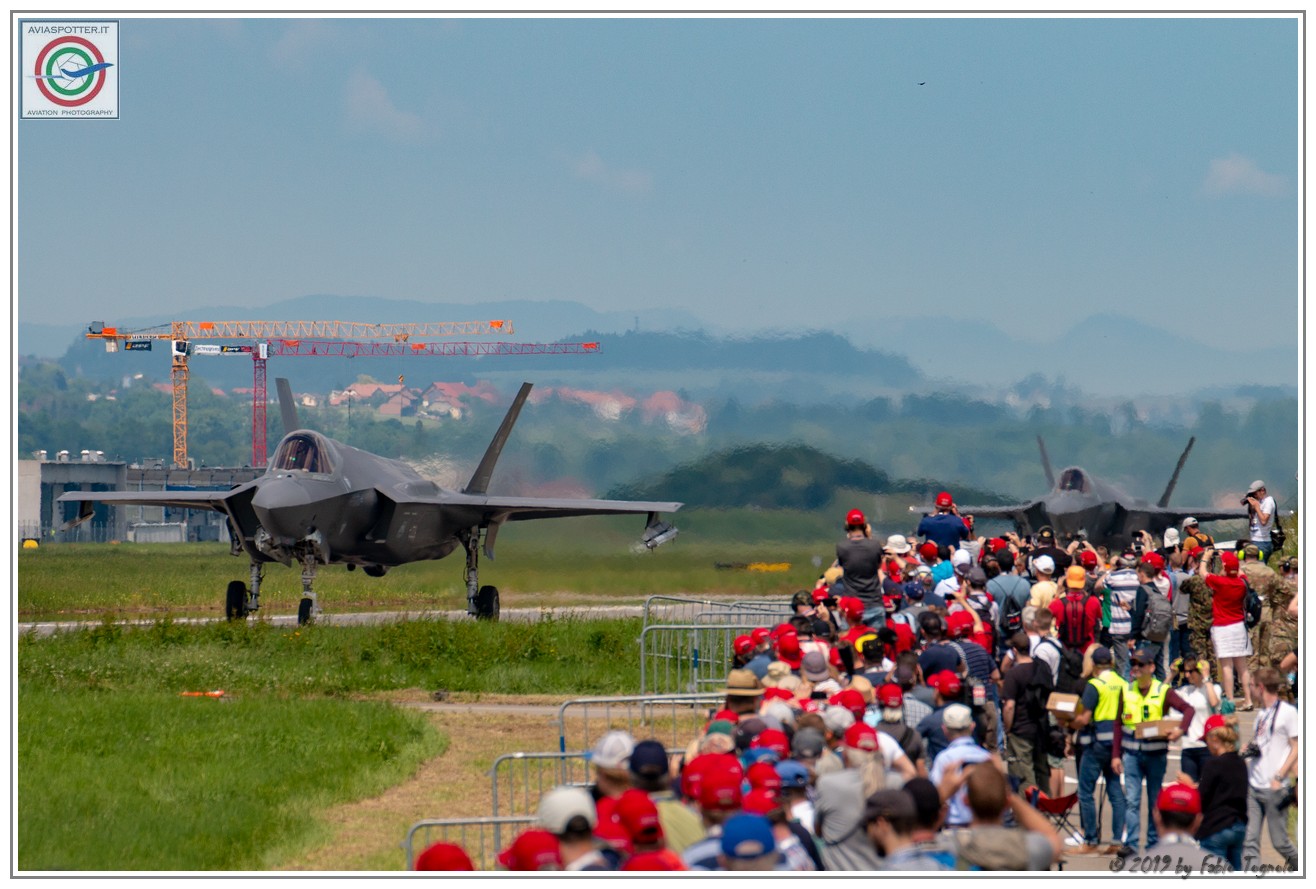 It took place on 7 June, on the grounds of the airport of Payerne, the 4th stage for the selection of the new fighter to replace the F fleet 5 Tiger II e F 18 Hornet of the Swiss Air Force.
This case was presented by Lockheed-Martin the most advanced Western fighter, the only of the 5th Generation, the futuristic F 35 Lightning II.

To make 8 missions planned by the Swiss testing protocol came from Hill Air Force Base (Utah) 4 F35 del 34th Fighter Squadron “Rude Rams”. This group, in 2016, He was the first in the world to achieve initial operating capabality (IOC) on airplanes F35. At the time of the tests some aircraft were deployed sull'Aviano Air Force Base and in fact from here came the 4 specimens landed on the main Swiss base.

In the morning it held the press conference which was attended by representatives of Lockheed-Martin and USAF. 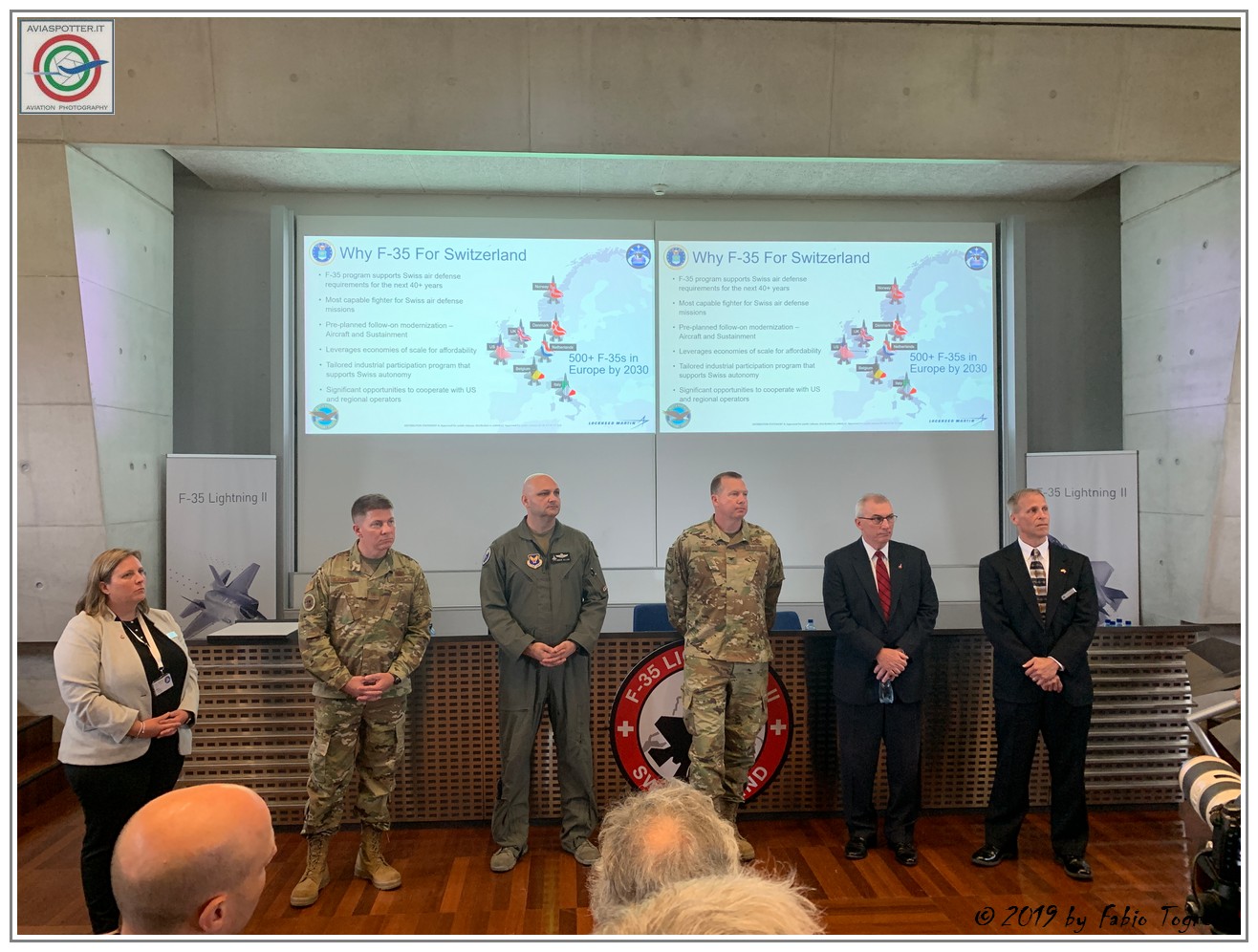 Outside of the classroom where the conference was held, They had been set up some boxes where you could make an experience of the technological level reached by the F 35. It was present, for example, a flight simulator on PC, with virtual helmet supplied, which he reproduced the experience from the pilot with an embryo of Sensor Fusion . 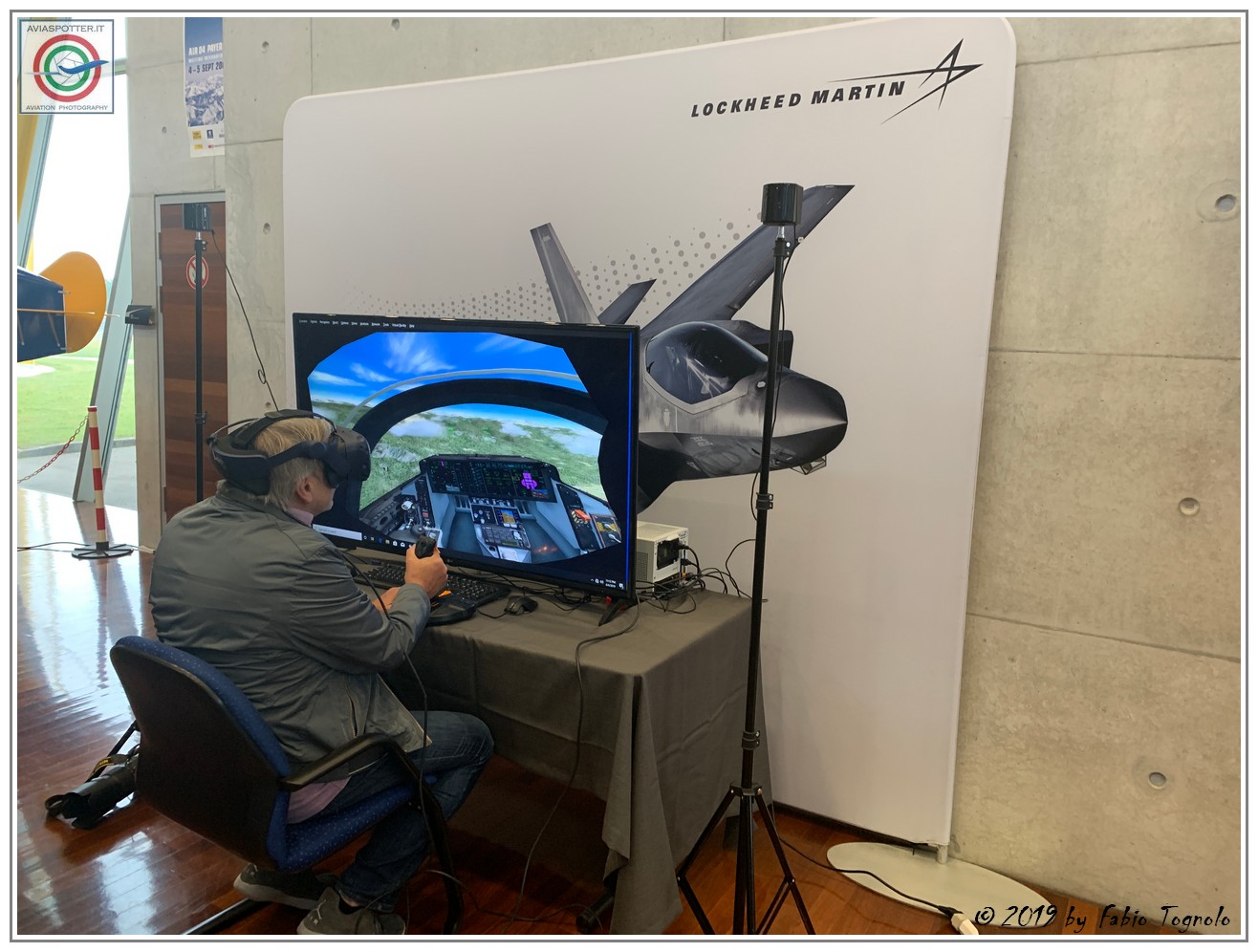 After the press conference we were escorted to the square of the base where it had been set up in the specimen Static 135079. It was equipped with Luneberg lenses, both above and below the terminal part of the fuselage, to amplify the radar return and mask the true stealth machine, but it lacked, unlike other 3 Airline present, of pylons for missiles to wingtips.
The operations of the Swiss base was, always eats, very high, with Swiss Hornet who operated normally. After a few minutes the 2 F 35 that would have made the morning sortie have made their appearance, taxiing from behind the hangars on our left and heading to take off from the head 05. by Advance 4 F 18 Local awaiting them have passed over our heads now very high. We were then taken back to the classroom for a few minutes briefing, giusto il tempo di provare il simulatore e attendere il ritorno della coppia.
La missione è durata all’incirca 1 h e 45′ and the planes landed for 23, allowing us to photograph them in a very short space of interruption of the track fence. They are then returned by the same taxiway from which they had marched the first leg but this time, having to tuck hangar from the rear, There are paraded much closer, allowing us to photograph them even from behind.

The morning ended so. However, it lacked the afternoon sortie. In fact AviaSpotter.it was also accredited to the event spotter, despite 500 available places have been burned in less than 3 minutes!

The spotter was the same area already used for the event of the F 18F Super Hornet (you can find which the photos) but arranged in a much more “americana” Free distribution of hot dogs, hamburgers e gadgets vari, including delicious shortbread biscuits in the shape of F 35. Around the base, however, the net was full of photographers ready to capture the unusual event lineup. At about 15:10 They have made their appearance the headliner of the day (After heavy takeoffs and landings of the natives) that, after having marched in front of the catwalk, they went still in the header 05 to take off, followed by 4 F Hornet. The simultaneous presence has also allowed us to compare the noise at takeoff (without afterburner) dell’F 135 with that of the F 404 the Hornet: quite another sound. Even the mission duration of the afternoon is like the one in the morning and ended in exactly the same manner: landing 23.
Another bridge in the opposite direction and the end of the day.

Below the video of the afternoon. Keep in mind that the shooting is done (like all the videos you find on this site) with a camera fixed on the flash slide of the reflex and therefore subjected to all the stresses deriving from the handling of the reflex during normal activity (tilt, click, zoom movement, etc.). Aircraft movement e, especially the “sound” however, there is everything……

What about……the Lightning I like more and more. I could see now on several occasions and each time I am surprised. It, if you ask me who will win the Swiss selection, I would say that if the divide 50 a 50 American candidates.