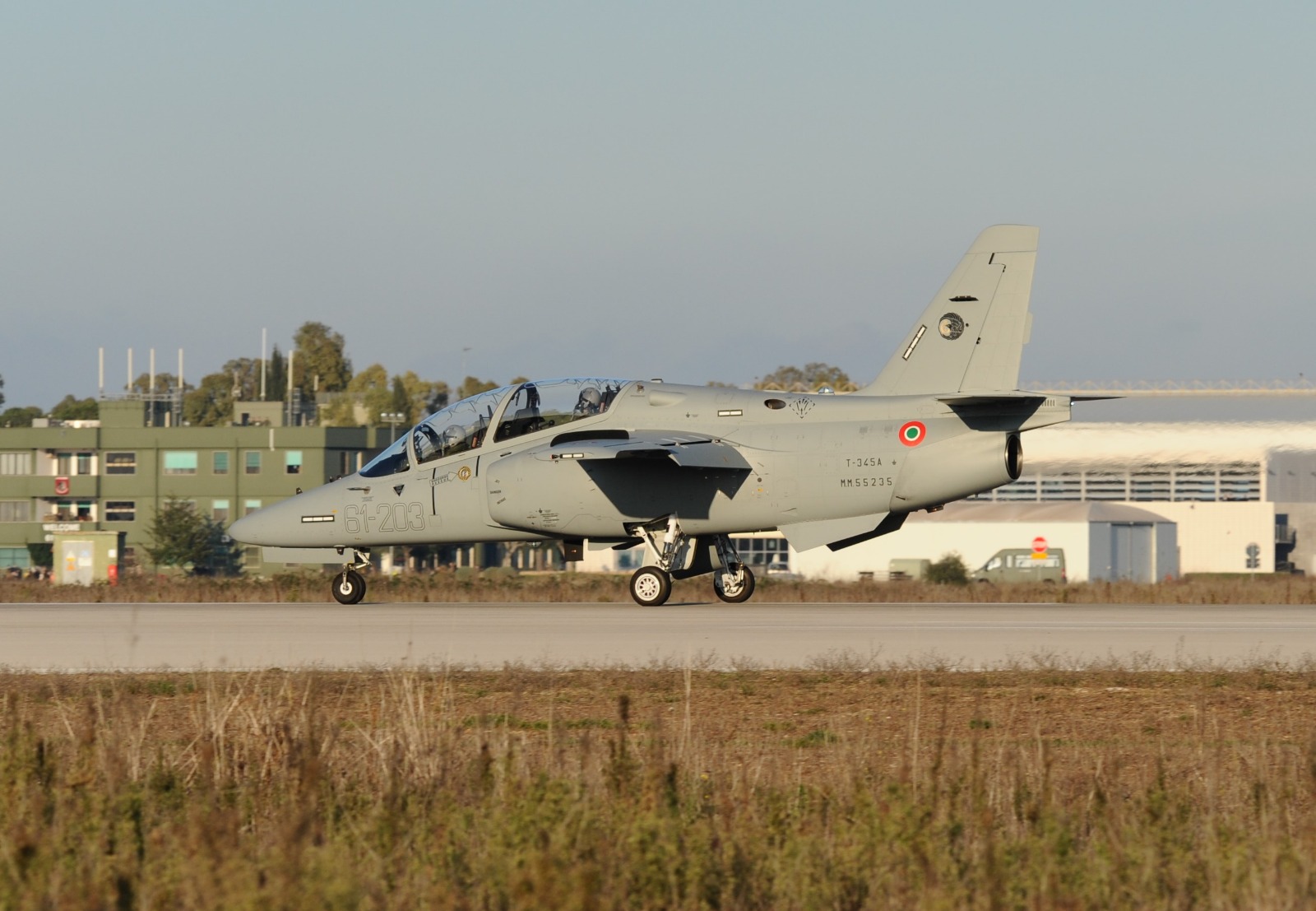 With the arrival of the new T-345A trainer, the transformation process of the Galatina flight school is consolidated (THE) in an increasingly technological and modern key

They have recently landed, today Wednesday 23 December, on the military airport of Lecce-Galatina, seat of the 61 ° Stormo, the first two examples of the basic training aircraft T-345A (M-345 High Efficiency Trainer – HET developed and produced by Leonardo Spa), aircraft totally “made in Italy” destined to gradually replace the entire MB339 fleet of the Armed Force, including those of the National Aerobatic Team.

The new trainer will be used by the 61st Wing for phases II and III of the training process of the Air Force and foreign air forces who intend to train their pilots at the international flight school. Thus begins a new and complete training program that will integrate the 61 ° Stormo with the future International Flight Training School (IFTS), whose works were inaugurated last 16 December at the Decimomannu air base (That).

The new two-seater jet will be the training pillar for the new generations of pilots and will allow for an improvement in training quality at lower costs. (hence the name High Efficiency Trainer); also thanks to the development of technologies already in use on the T-346A, the 345 will allow a more dynamic and efficient transition to the advanced stage of training “Advanced/Lead-In to Fighter Training” (phase IV).

“Today the arrival of this new aircraft represents an important moment not only for the Air Force and for the whole country but also and above all for this territory which for decades has been the symbol of a winning synergy”, declared Air Force General Alberto Rosso, Chief of Staff of the Air Force. “In the Apulian skies, the Air Force has trained and will continue to train Italian and foreign military pilots with the same spirit and the same passion but with an integrated training system that is now enriched with a new and important aircraft, further demonstration of the ability of the Air Force and Leonardo to team up. Thanks to cutting-edge skills and technologies it will be possible to train – in an even more cost effective way – professionals able to manage increasingly advanced and complex aircraft. The 61st Stormo, international leader in military flight training, it is a concrete example of Italian excellence worldwide and a pride for the entire country system. An ideal continuity in the sign of the Tricolor between two Italian aircraft – the MB339 and the T-345 – for a flight school that will continue to guarantee its institutional mission of training military pilots but with increasingly advanced tools and increased skills”.

The transition from 339 to the 345 it will happen gradually. Before operational use in the training process, the new aircraft will undergo an Operational Test and Evaluation process (OT&It) which will be conducted by the Experimental Flight Department of the Logistics Command.
The first two specimens, produced at Leonardo's plants in Venegono Superiore (will), they were officially handed over to the Air Force on Tuesday 22 December at the end of the testing and acceptance procedures conducted by the personnel of the Aeronautical Armaments and Airworthiness Department (DAAA) who have operated, jointly, with the staff of the Milan Territorial Technical Office employee (UTT) and with the support of the Experimental Flight Department and the 6th Detached Technical Service, entities dependent on the Logistics Command of the Air Force.

in 75 years of military flight training, the 61st Wing of Galatina has seen generations of military pilots training on different types of aircraft: from T6 “Texan” of the immediate “postwar period”, to MB326 of the 60s / 70s; from MB339 in Alpha and CD versions, still operational, to the T-346A which from 2014 revolutionized advanced flight training.

The 61st Stormo, dependent on the A.M / 3 ^ R.A. Schools Command. of Bari has the task of providing flight training on jet aircraft: phase II – Primary Pilot Training, common to all student military pilots, aimed at identifying the lines on which they will fly (fighters, remote piloting (RPA), helicopters, transport); phase III – Specialized Pilot Training, aimed exclusively at student pilots selected for the lines “Fighter” and “RPA” which ends with the achievement of the military pilot's license (aquila turrita); phase IV – Lead In to Fighter Training – LIFT, preparatory to subsequent use on latest generation fighter aircraft such as Eurofighter and F-35.